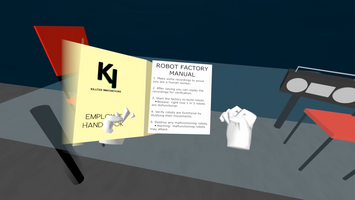 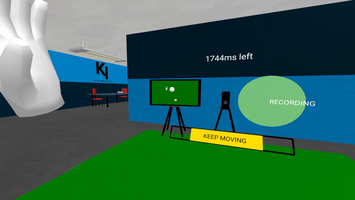 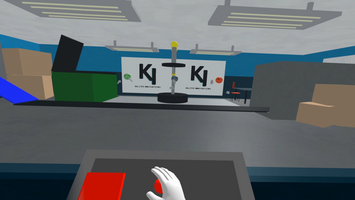 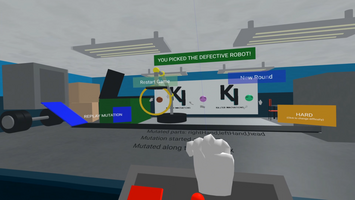 Off-Killter has received a huge update for submission to the GameDev.tv Community Jam! Read below to find out more.

When I came up with the initial concept for Off-Killter, all I knew for sure was that I wanted it to revolve around the mechanic of recording and playing back the user's movement.

While I was implementing the recording/playback mechanic I was thinking up ways to gamify it and tossed around a few options. The original idea I came up with was to have the replay avatars be robot "suspects" in an interrogation lineup; the mutated avatar is your suspect and tries to flee and/or attack you. Another idea was the player acting as security for a robot casino with the goal of identifying suspect intruders before they gain entrance.

As I finished implementing the initial mechanic I designed a placeholder interrogation room; a scene with a basic table and two rooms separated by a window. I transferred the code into my main scene and started updating the UI. Then I came up with the idea of making the room into a factory...and the player working at that factory with robots which eventually evolved into the current build where you are QA testing robots as they roll off the assembly line.

I wanted to start updating the scene with the first addition being a help manual - but nobody wants to just read a bunch of text on a wall. I added physics to the scene and created a book-like help manual. Since I had physics I figured why not add some extra stuff to play around with so I started adding boxes, then shelves, then chairs, etc. I also had to create the factory where the robots would come from.Before long I had a brand new scene.

Eventually I knew there needed to be at least one more gameplay mechanic to make it feel like a game, so I added in the control panel and joystick to help further gamify picking the defective robot. That made selecting the endgame defective robot much more satisfying than just pointing and clicking.

I'm really glad I took the time to start this project and implement the recording/playback system. I was initially inspired by an existing A-Frame component that is seemingly abandoned/not working correctly so I decided to write my own. As the project states, the base idea/tech has many potential uses: gameplay animations, gameplay QA, game mechanics, etc.

Not going to lie, the implementation of the joystick leaves a lot to be desired, but I really enjoy the idea I came up with to make selecting the robots more fun. I'll elaborate on this more below but the plan is to have dual joysticks and have more control over the replay head when you select it and remove it from the assembly line.

They don't (need to) move up and down but you start in one of the elevators that leads into the Killter Innovations factory. I had a lot of fun implementing these elevators. I animated the doors of both elevators (independently) to open and then close on a timer. The elevator makes a audible noise when "arriving" and welcomes you with a ding. There's also motivational posters to encourage you while you ride!

I'm not satisfied with the scene performance of the game at the moment so I want to tweak and improve the scene for better FPS across a wider range of hardware. This will include codebase optimizations as well as optimizing the amount of objects in the scene at once and when physics are applied to what objects.

I also want to implement (at a minimum) Chrome support and verify functionality on devices other than the HTC Vive.

One round is great and all but it would be nice to just continually pump robots out of the assembly line. I plan to add an "endless" mode with another mechanic that will allow you to continue playing until you run out of "lives". More on this soon!

When you select the robot you think is defective, he can't get shipped to a customer! I'm planning on implementing another joystick that moves the crane vertically so that you can dump defective robots into the bin to end the round. The functioning robots will head off into the truck to be shipped off. This should add a fun element of gameplay and there might be a twist if you recycle the wrong one!

Currently the joystick is physics based but very wonky and not anchored in position. As a result there is unexpected behavior when rotating or moving the stick too far. This should be solved by implementing the correct physics constraints which I am still working through. If you have any ideas, please reach out! 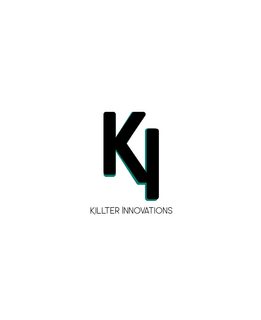 Off-Killter is completely open source and available on GitHub under the WTFPL license. It was written in JavaScript/HTML & built with A-Frame which is an open source web framework for building virtual reality experiences.

Any bundled assets or libraries are the property and fall under the license of their respective owners.

Connect with me to keep up with my current projects. Help me out by following me and starring/sharing my work!